A heartwarming video has captured the tender moment a soldier returning home from Afghanistan met his baby daughter for the first time.

His face filled with joy, Captain William Lotts gently cradled four-month-old Finley – kissing her, nuzzling her and staring at her in awe as his tearful wife, Brittany, looked on.

The soldier finally held Finley after safely completing a nine-month deployment in Ghazni and returning to his family in Fort Drum, New York.

‘She felt pretty light, new and fragile,’ he said, still reeling from the experience. ‘It felt pretty amazing.’ 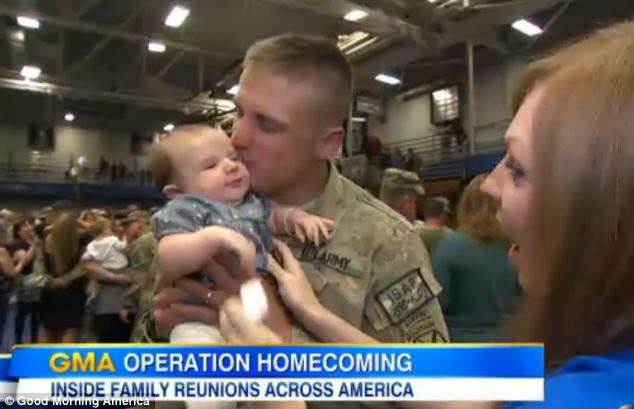 Meeting daddy: Captain William Lotts kisses his four-month-old daughter Finley after meeting her for the first time, as his wife Brittany looks on. He returned from a 9-month deployment to Afghanistan