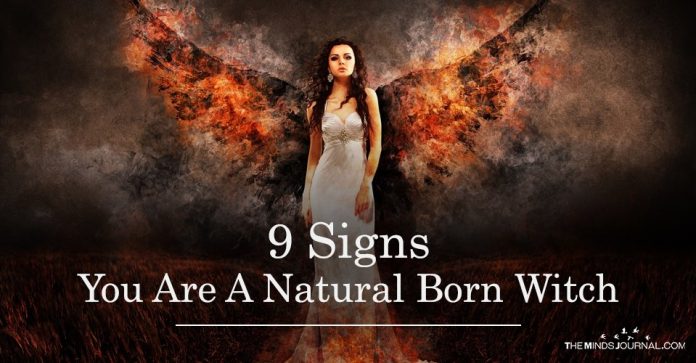 A Witch (a gender neutral term – if you prefer enchanter/enchantress ) is someone who uses his/her will in order to bend reality. Etymologically the word ‘witch’ comes from the germanic word: weik which means to curve, to bend. We are all born with Magical Powers. There are however some of us who recognized this potential since childhood. Hence, this individual might be called ‘a Natural Witch‘ or ‘Born Witch‘.

Another definition of the Natural Witch could be the one who uses the means and powers of Mother Nature in order to cast magic. However, this list will provide insight for the ones who are wondering is they have somehow “inherited” magical powers (via bloodline or spiritline).

How many of these traits do you have?

Natural Witches are deeply affected by the Moon. Their sleep circle is affected by the phases of the Moon. This means that the power of the Moon grows and wanes inside of them. This affiliation gives great potential to those individuals. After all, the Moon is associated with all types of Magic. Artemis(Diana in Latin) – sister to Apollo – Goddess of the Moon, was the mistress of Magic and Divination in Ancient Greece.

Are you an Empath? (See here if you are). If yes (!) then you have another powerful quality. ‘Empaths are people who are very sensitive to the energies/vibrations that surround them, both thoughts and emotions, of other people, animals, plants and even that of spirits. This sensitivity seems to stem from the ancient belief that everything is connected therefore it is easier for some people to make this happen- tap into the energies that surround us and become one with them.’ Emotions are the Fuel for True Magic!

If you have the natural ability to sense the energies around you, it means that you are more capable to focus and use them in order to achieve what it is you want. Empathy is a very strong quality and a proof that being “sensitive” shows Real Power and not weakness.

How common is it to be followed by all kinds of animals? Is there a dog keeping you company while you get back home? Are cats attracted by you? Have you noticed that birds fly around you and your home all the time? It’s not secret that Witches love the company of Animals around them. They do not even exclude them during the Magical Rituals. Ever heard of the Witch’s familiars?

4.  Not afraid of Thunders

Do you love thunders? Are you excited during a Storm? They you are a Wizard… Harry! Thunder is considered the most noble form of natural energy, one that cannot be tamed. This is why it’s the Weapon of Zeus, kind of the Gods (along with Thor).

Thunder is in fact excessive and concentrated magical energy. If you feel magic in you growing during thunderstorms you have a natural incline for pure magic!

This usually comes from a painful experience. Do you remember a time, when someone of your beloved ones was sick or injured and you felt terrible about it? Do you remember that you wished him/her well, or touched him/her and after few hours s/he was healed or feeling better?

Or of course the exact opposite. You wished him/her harm and something terrible happened to them. This doesn’t mean you’ve got a demonic nature. It means that you didn’t direct your emotions in a beneficial way. Now you know better. Harming others – is harming ourselves. We are all connected. Always remember this!

Chi – the living energy which runs inside our body – is more intense in Witches. Actually, this is one form of Magic. Witches intentionally focus on their life energy and can pass it towards the one they desire. The same way Witches enchant an object, they can heal etc. If you are able to do that, then my friend, you are a Natural Witch!

Natural Witches have a talent spotting these patterns thus predicting what is going to happen to then and to their loved ones. Do you see omens during your day?

Although to intentionally see Visions requires practice (see here how to see Visions using the Magic Mirror) a Natural Witch has the ability to catch glimpses of the other Realms. A Witch may see or smell or hear or taste moments of the past the present and the future (see here about the Magical Abilities).

Do you remember yourself watching weird visions you cannot easily explain? Do you see dreams that come true? These are powerful traits of a Real Natural Witch.

8.  Power from the Earth

Do you remember yourself collecting crystals and stones from the Earth since childhood? Witches sense the power of crystals and love to have them around. You may also have noticed that a Crystal brings your bad luck! This adds to this claim as all crystals are not harmonious with our aura!

A Natural Witch is likely to have tapped into past life’s experiences in order to empower this life. Have you noticed watching yourself in visions or dreams being someone else but it feels like it’s you? Do you have a Mark on your body which feels inherited from a past life (see here more about Witch Marks).

Past lives affects this life as it’s all a circle. There is no such thing as Death. Death is only a part of life, a new phase which gives birth to another life. A Witch knows about his/her past life and shows interest in exploring them – chapter by chapter. See here visions of your past life.