For women who have survived Hodgkin’s lymphoma, the risk for subsequent estrogen-receptor (ER)–negative breast cancer is nearly six times greater than for the general population.

The study also found that the increased risk for ER-positive breast cancer is not as significant and is primarily associated with previous radiotherapy.

“The elevated risk for ER-positive disease only with radiotherapy suggests the opportunity for chemoprevention, which has been successful in lowering risk for other high-risk women,” first author Diana R. Withrow, PhD, of the Radiation Epidemiology Branch, Division of Cancer Epidemiology and Genetics, National Cancer Institute, Bethesda, Maryland, told Medscape Medical News.

The study was published online January 18 in JAMA Oncology.

The overall risk for breast cancer is known to be high among young survivors of Hodgkin’s lymphoma, particularly those who receive radiotherapy to the chest when they are younger than 30 years. However, there has been little research involving large cohorts in which the role of radiotherapy has been evaluated in subtypes with respect to ER status. The researchers note that this is the largest study to date to investigate this issue.

For the study, Dr Withrow and colleagues used data from 12 US National Cancer Institute Surveillance, Epidemiology, and End Results (SEER) registries. They identified 7355 female patients aged 10 years to 39 years who had been diagnosed with first primary Hodgkin’s lymphoma from 1973 to 2009. The mean age of the patients was 26 years at the time of diagnosis of Hodgkin’s lymphoma.

After a follow-up of a minimum of 5 years after diagnosis, 377 patients (mean age, 45 years) were found to have developed invasive breast cancer.

Among the breast cancers, 57% were ER-positive, and 34% were ER-negative; for 9%, ER status was unknown.

Compared with the general population, however, the relative risk of ER-negative breast cancer was significantly higher (standardized incidence ratio [SIR], 5.8) than the risk for ER-positive breast cancer (SIR, 3.1; P < .001). 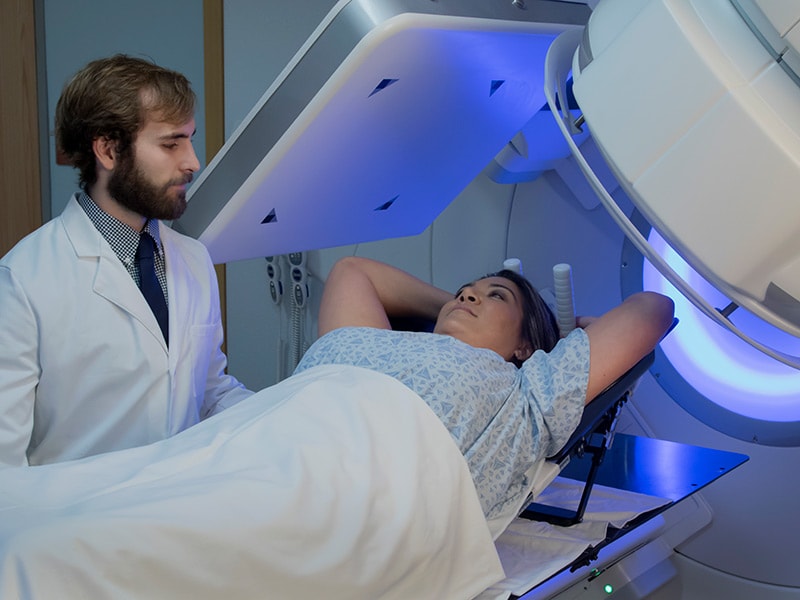 The increase in the relative risk for ER-negative breast cancer compared to the general population was seen regardless of whether patients underwent radiotherapy.

“We were surprised to see the ratio of estrogen-receptor status so skewed toward ER-negative disease, compared to the general population, and to note that this risk was elevated regardless of treatment modality,” Dr Withrow said.

“This pattern suggests other causal agents for ER-negative disease,” she commented.

The authors note that currently, as many as 40% of young women with Hodgkin’s lymphoma receive radiotherapy, despite research suggesting that chemotherapy alone is associated with increased survival.

Studies supporting the argument for using chemotherapy alone, without radiotherapy, include a randomized trial of 405 patients with stage IA or IIA Hodgkin’s lymphoma that was published in the New England Journal of Medicine. In that trial, chemotherapy alone was associated with higher overall survival, owing to a lower death rate from other causes at a median follow-up of 11.3 years.

In commenting on the current study, Laurie Sehn, MD, a clinical associate professor at the University of British Columbia in Vancouver, Canada, and medical oncology spokesperson for the American Society of Hematology, noted that efforts are being made to reduce the use of radiotherapy when possible.

“In general, usage has been declining, as strategies including PET [positron-emission tomography]–guided approaches have allowed many patients to avoid the need for radiation. However, in certain cases, radiation is still required and recommended.”

She added that the findings of an absence of an association between prior treatment and ER-negative breast cancer were particularly noteworthy.

“This suggests that different factors may be at play in increasing the risk of ER-negative breast cancer. The large cohort size of this study increases the strength of these findings,” Dr Sehn said.

Further studies are currently underway with the Childhood Cancer Survivors study to evaluate those and other details, she said.

“This kind of hypothesis-generating research is the first step in the long process of understanding second cancer etiology,” she added.