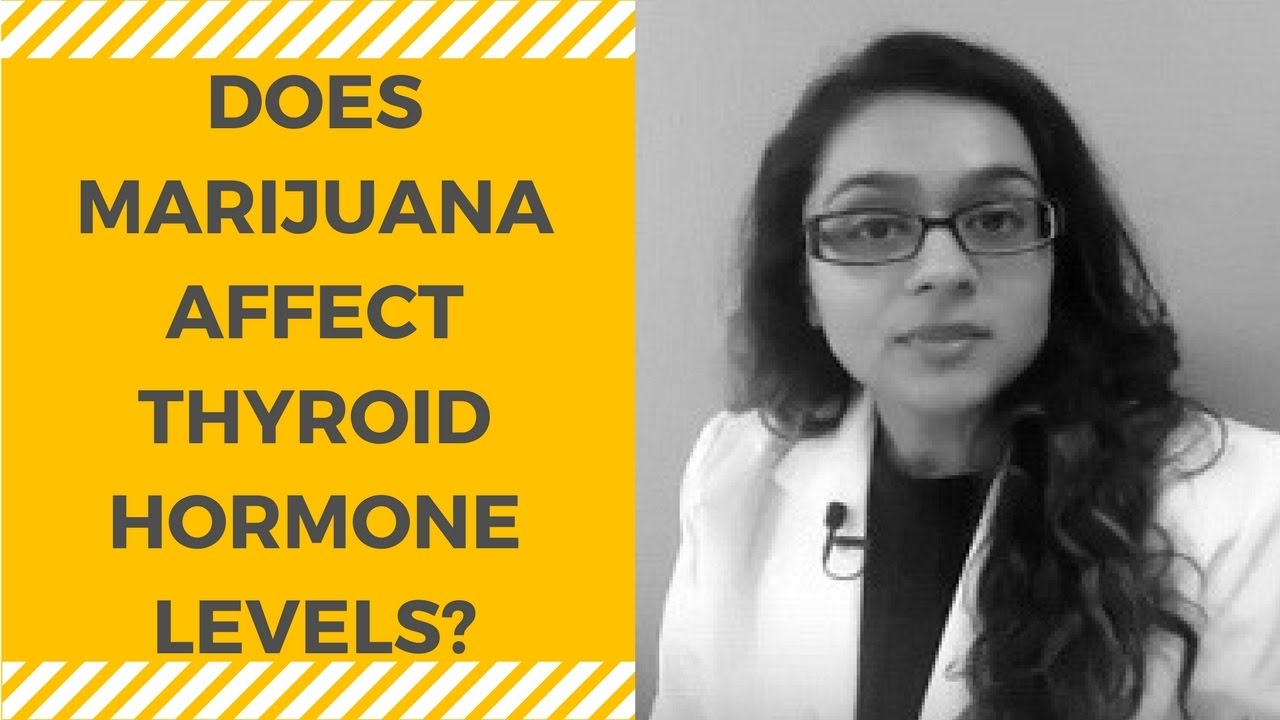 Over the years I have had a few people with thyroid and autoimmune thyroid conditions ask me if medical cannabis, also known as medical marijuana, can benefit their health.  In the past I hadn’t done much research on cannabis, but with the questions coming in more frequently I figured it was a good time to do some research and write an article on this topic.  In addition to discussing whether cannabis can benefit people with thyroid conditions, I’ll also discuss some of the other more common health conditions that may benefit from cannabis.

There are over 480 natural components found within the Cannabis sativa plant, and 66 of these have been classified as being “cannabinoids”.  Delta-9-tetrahydrocannabinol is the cannabinoid that is primarily responsible for the psychoactive effects of cannabis.  As for the mechanism of action of cannabis, this relates to the cannabinoid receptor system, which consists of CB receptors CB1 and CB2 .  CB1 receptors are present in the brain and spinal cord and in certain peripheral tissues, while CB2 receptors are expressed primarily in immune tissues.  As a result, the location of the CB1 receptors explains why cannabinoids can influence functions such as memory, pain regulation, and motor (control), and stimulation of the CB1 receptor produces marijuana-like effects on the psyche and circulation.  On the other hand, activation of CB2 receptors is associated with anti-inflammatory and anti-cancer effects.

Health Conditions That May Benefit From Cannabis:

What I’d like to do now is discuss some of the health conditions which have shown to benefit from cannabis in the research.

Cancer.  There are few ways in which cannabis can benefit people with cancer.  First of all, the main bioactive cannabinoid Delta-9-tetrahydrocannabinol has been approved for treatment of cancer chemotherapy-induced nausea and vomiting.  Cannabinoids may also be beneficial in treating cancer-related pain.

Chronic Pain.  Numerous studies show that cannabis can be beneficial for chronic pain, and apparently has no overdose levels like certain medications used for pain.

Epilepsy.  There is also evidence that cannabis can help with epilepsy, although more studies need to be conducted on the efficacy and side effects of cannabis for the treatment of seizures and epilepsy in children and adults.

Insomnia.  Cannabis can also help some people to get better quality sleep.

Crohn’s Disease.  One study involving 21 patients with Crohn’s Disease looked to determine if cannabis can induce remission in patients with this condition .  The study showed that complete remission was achieved by 5 of 11 subjects in the cannabis group, and only 1 of 10 in the placebo group.  Of course more studies involving larger groups need to be conducted, although this small study is still encouraging.  In addition, those people who received cannabis reported improved appetite and sleep, with no significant side effects .

I came across only one study which showed that cannabis can affect thyroid hormone, along with other hormones .  The study showed that the psychoactive ingredient tetrahydrocannabinol (THC) is the primary compound responsible for this.  Unfortunately THC seems to result in low hormones, including testosterone, prolactin, growth hormone, and yes, thyroid hormone .  It also may cause an elevation of cortisol .  However, besides this being a small study, it was also conducted on men.  It would be wonderful to see some larger studies on both men and women with hypothyroidism and hyperthyroidism to see how cannabis affects the thyroid hormone levels.

Although more research needs to be done to determine the impact that cannabis has on thyroid hormone levels on both men and women, numerous studies show that cannabis might benefit some people with autoimmune conditions.  Autoimmune conditions such as Hashimoto’s Thyroiditis and Graves’ Disease are characterized by a Th17 phenotype , and this might be reduced by the main psychoactive cannabinoid, Δ-9-tetrahydrocannabinol (THC), and the main nonpsychoactive cannabinoid, cannabidiol.  The same study showed that cannabidiol caused an increase in the anti-inflammatory cytokine IL-10 .  A review article discussed how cannabinoids downregulate cytokine and chemokine production, and in some cases can upregulate regulatory T cells.  I’ve discussed in other articles how decreasing proinflammatory cytokines and increasing regulatory T cells can help to suppress the autoimmune component, although of course it is important for the trigger to be removed.

While there are no studies which discuss whether cannabis can specifically benefit those with Graves’ Disease and Hashimoto’s Thyroiditis, there are a few studies involving other autoimmune conditions, such as multiple sclerosis.  A big reason why cannabinoids can benefit people with multiple sclerosis is because they not only modulate the immune system, but they also have neuroprotective properties.  There is also evidence that the anti-inflammatory properties of cannabinoids can be beneficial for those people with rheumatoid arthritis.  And as I mentioned before, cannabis seems to decrease the Th17 inflammatory autoimmune phenotype that is present in both Graves’ Disease and Hashimoto’s.

Are There Adverse Effects Associated With Cannabis?

One study evaluated the safety of cannabis use by patients with chronic pain over one year, and the study found that there was a higher rate of adverse events among those who used cannabis when compared with controls, but when using an average dose of 2.5 grams per day the adverse side effects weren’t serious.  Another study showed that patients with multiple sclerosis who smoke cannabis are more cognitively impaired than nonusers, and it seems to do this by further compromising cerebral compensatory mechanisms.  A systematic review and meta-analysis of longitudinal studies showed that heavy cannabis use may be associated with an increased risk for developing depressive disorders.  Some people also have an IgE cannabis allergy, and the reactions can vary from mild to life-threatening.  Although there are potential side effects of cannabis, when used in smaller doses the side effects seem to be minimal in most cases.

In summary, there are hundreds of components found in cannabis, and the cannabinoid receptors CB1 and CB2 play an important role in the mechanism of action.  Some of the different health conditions that may benefit from cannabis include cancer, peripheral neuropathy, chronic pain, epilepsy, insomnia, Crohn’s disease, and Parkinson’s disease.  One study I came across showed that cannabis can cause a decrease in thyroid hormone levels, along with other hormones, although more research needs to be conducted in this area.  And there is evidence that cannabis might benefit autoimmune conditions such as Graves’ Disease and Hashimoto’s Thyroiditis by reducing the Th17 phenotype.  Side effects are possible with cannabis, although these usually are minimal if small doses are used.