“We should be concerned,” Winchester said. “This is mass exposure.”

One warm day in July, Teri McCall drove a four–wheeler down a winding track through groves of citrus, avocado, and persimmon trees. McCall’s husband, Jack, always joked that she would never work on their 20–acre farm on the Central California coast, four hours south of San Francisco, because she “might break a nail.” But since Jack’s death in 2015, Teri has been doing most of the work. “The first year, the lemons just fell to the ground,” she said. “I wasn’t able to do anything, I was so distraught. Now I’m in constant battle with the gophers.”

McCall remembers her reaction when a doctor said the rash on Jack’s neck was cancer: “I just laughed and thought, ‘How could that be true?’” Jack was 65 at the time, working on the farm full-time and surfing on the weekends. The doctor diagnosed the condition as primary cutaneous B-cell lymphoma, usually benign and confined to the skin. But the rash persisted. Four years later, Jack felt swelling in his lymph nodes. That time, the diagnosis was grim: non-Hodgkin’s lymphoma.

Undergoing chemotherapy and radiation, Jack grew thin and weak. On Christmas Eve, Teri found Jack with his eyes rolled back and his mouth twisted up; he’d had a stroke. Teri and the children spent the night by Jack’s bedside in the hospital, and the next morning—six months after the diagnosis—she decided to have him taken off life support. “It was the worst moment of my life,” Teri said.

Jack preferred not to use chemicals, but he believed Roundup was safe and used it regularly for more than 30 years. According to Teri, it was the only herbicide he ever used. As the family sat around Jack’s bed on his last days, his son read on the Internet about potential links between Roundup and non–Hodgkin’s lymphoma. After Jack’s death, Teri could barely get out of bed, but eventually she began reading the reports herself. She now believes Roundup was responsible for his death—and maybe their dog’s, too. Duke, a black Lab, spent every minute with Jack until the day he died of lymphoma in 2009.

In early 2016, McCall joined other farmers, gardeners, migrant workers, and landscapers, represented by multiple law firms, to sue Monsanto in federal court. One plaintiff, John Barton, 68, has lived and worked on California farms for most of his life. “We’ve used Roundup since it came out for weed control on our reservoirs and the ditches of cotton fields,” he said. Barton’s cancer has spread to both sides of his body; he’s retired from farming and no longer uses Roundup. But he’s continually exposed to the chemical because he lives in the heart of the San Joaquin Valley, one of the most productive agricultural regions in the world. “Right across the road from me is GMO alfalfa; the dairies do GMO corn,” he said, speaking of the fields planted with crops that have been modified to resist repeated dousing with Roundup. 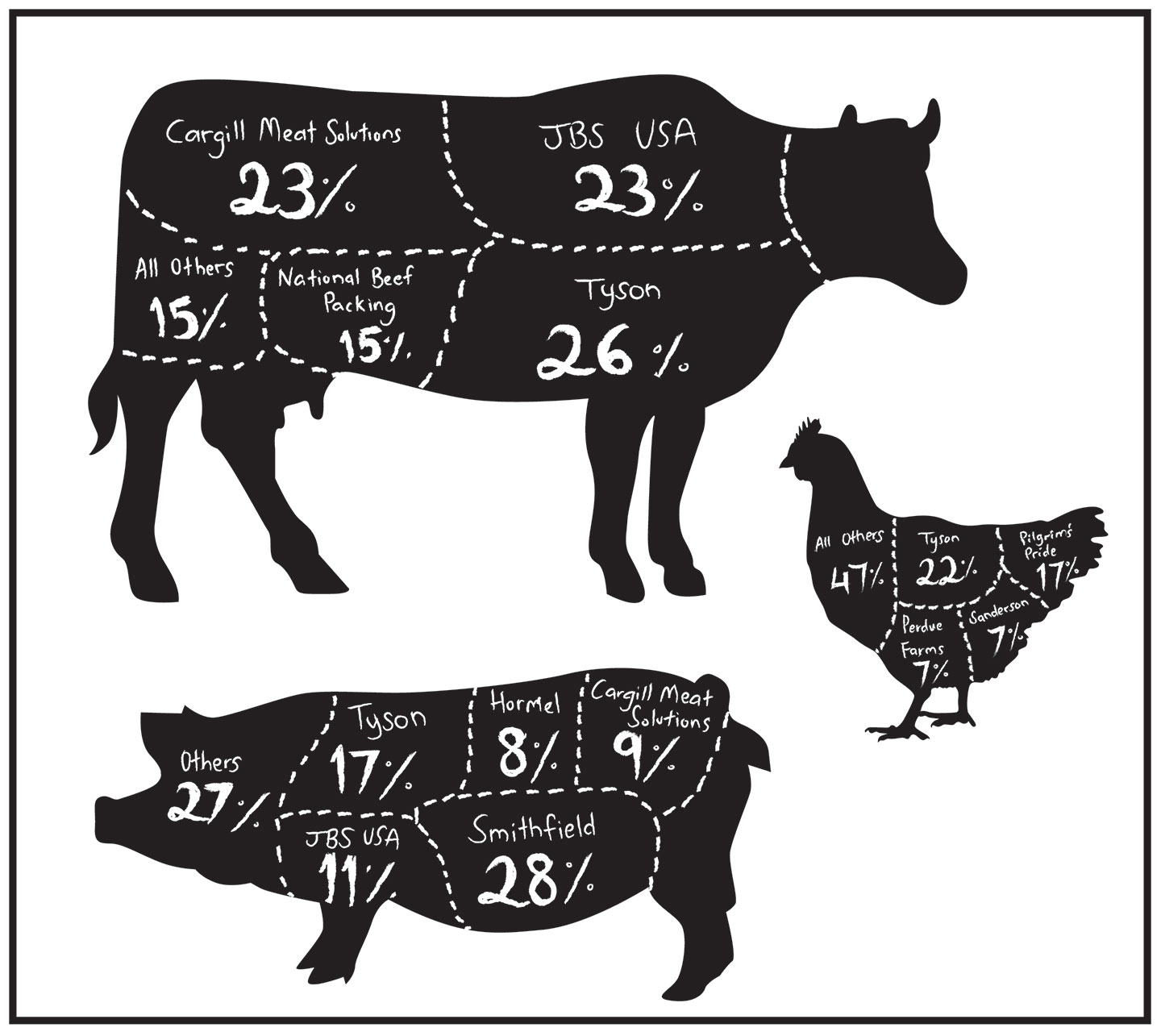 BIG FOOD: Seed and chemical corporations, meat producers, grocery chains, even beer companies are devouring smaller businesses as well as their major competitors, leading to extreme consolidation throughout the food industry. Thanks to lax antitrust enforcement, farmers are increasingly bound by oppressive contract systems that leave them at the mercy of the handful of companies to which they can sell. For all of us eaters, consolidation means fewer choices and higher prices. For Big Food, it means greater profits and ever-expanding political power, which it defends via various lobbying groups like the National Pork Producers Council, the American Farm Bureau Federation, and the National Restaurant Association. (Graphic by Nurul Hana Anwar)

McCall and Barton’s case hinges on a determination made by the World Health Organization’s International Agency for Research on Cancer (IARC) in March 2015. The IARC, which has been developing reports on expected and known carcinogens since the 1970s, classifies materials into categories, from carcinogenic to humans (Group 1) to “probably not carcinogenic” (Group 4). The agency’s evaluation of glyphosate was conducted by a group of 17 experts from 11 countries and led by Aaron Blair, an epidemiologist with the National Cancer Institute. In the months prior to and then during a weeklong meeting in Lyon, France, the committee pored over the publicly available scientific literature—hundreds of pages of published journal articles and reports.