And, according to Sam anyway, Ryan isn’t alone. ‘We see patients like Ryan a lot. What they need from us as doctors is our time. But you physically don’t have the time to sit with a patient for 20 minutes and listen to them, because I have 50 other patients to see by lunchtime,’ he explains, as he scurries off, holding a clipboard.

Working in a system so overstretched is destroying any satisfaction in the job, he admits. ‘It sours a lot of what you have worked so hard for all these years.’

The tales all these young medics have to tell are uncannily similar. Emily Maile is 26 and in her third year as a junior doctor. Again, you can’t doubt that she is in the job for the right reasons.

She has chosen to specialise in the difficult area of palliative care, mostly inspired by the fact that her own mother (also a doctor) was diagnosed with breast cancer three days before Emily’s final exams. Although her mum recovered, Emily decided her future lay in oncology.

It’s a field where you might imagine there is more time to sit at a patient’s side holding their hand. Well, no. Emily’s experience is brutal. Like Sam and Holly, she is filmed haring around corridors, bemoaning the fact that there simply is not enough time for her to implement all the things she was taught during her training.

‘This job has broken me,’ she cries, close to tears after a particularly hard shift when her team is three nurses down and a 25-year-old patient with stage 4 throat cancer — meaning it has spread around her body — is left waiting four hours for a half-hour appointment. On the same shift, Emily has to tell another patient, Tracey, who used to work at the hospital, that her lung cancer treatment is no longer working.

We would all want to have an Emily holding our hand as we die, but sadly the system no longer seems to allow for that.

The experiences of both staff and patients are deeply troubling — but perhaps the most shocking footage comes from the senior hospital staff, who have the clearest sense of how close to the edge their departments really are. It is widely accepted that in the NHS, the army of junior doctors — 63,000 in the UK — provide absolutely essential cover for hospitals struggling to cope. Each time a junior doctor decides they cannot continue in the job, another gap appears in the straining infrastructure.

At Northampton General, Dr Lyndsey Brawn pores over the figures in front of her, and gulps. ‘Out of 65 junior doctors we have ten gaps,’ she says. ‘Next week, that is going to be more because two more are leaving, so there will be 12 gaps.’

How will they be filled? By doctors recruited in haste from abroad, she says. Lyndsey reveals, before dashing off to avert another crisis, that so pressed is this hospital that foreign doctors — and medics with less experience than anyone would like — are actually being recruited via the video-calling service Skype.

‘Sometimes they have not done very much and it is a bit of a gamble,’ she admits.

Her matter-of-factness about the prospect of the entire NHS sliding into the abyss is devastating. ‘It feels as though we are on the edge of things cracking up, no doubt about that,’ she adds. 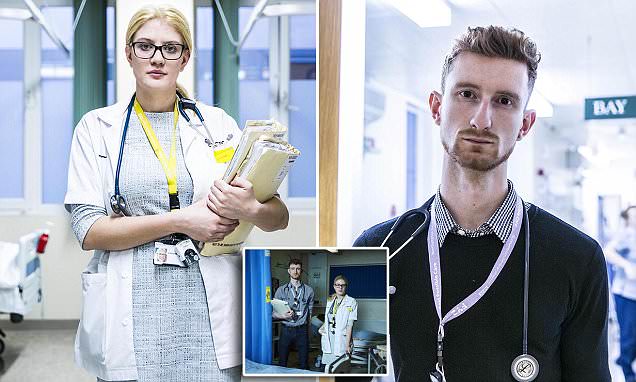 Confessions Of A Junior Doctor has three episodes, and by the end of the first, the NHS already seems to have lost one of its most promising foot soldiers. Sam will now become one of the 6,000 junior doctors who apply to work overseas every year.