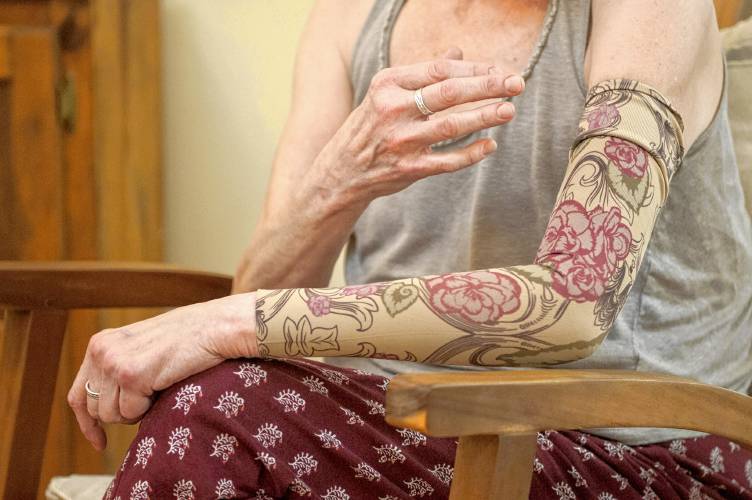 A vine of pink begonia blooms climb up Kate Collins’ left arm in what looks like a full sleeve of tattoos.

People around town regularly stop her and ask about them only to realize, with a closer look, that there is a seam creeping up her arm. The flowers are not tattoos; they’re a printed pattern on a compression sleeve, a band of medical grade material that she wears every day to ward off the swelling from lymphedema, a condition related to the breast cancer diagnosis she received a dozen years ago.

Lymphedema can occur after a patient has her under-arm lymph nodes removed to determine whether her cancer has spread. Besides causing swelling, the condition can be painful and increase the risk of skin infections.

Sleeves, like the one Collins wears to keep her lymphedema at bay, feel like tightly wrapped ace bandages.

“It’s uncomfortable, it’s hot and I hate wearing it,” says Collins, 64, who had both her breasts and the lymph nodes on her left side removed. “But I figure if you’ve got to wear it —  you might as well make a fashion statement.”

“It is a chronic disease,” she says of lymphedema. “As if you don’t remember that you had breast cancer … here is a reminder.”

Once a woman has had lymph nodes under her arm removed, she is at permanent risk of developing lymphedema. And, when she gets it, there is no way to get rid of it. The two ways to ease the symptoms are the compression bands and light massage. It’s a breast cancer side effect that hasn’t gotten enough attention, says Collins.

“Nobody told me that I was going to get lymphedema, nobody warned me,” she says. “Wouldn’t you think that my surgeon or my oncologist would say, ‘by the way, you lost all your lymph nodes, you are at risk of lymphedema.”

But no one did. When her lymph nodes were removed a dozen years ago, a medical assistant in the New York hospital where she was being treated left her with a few cryptic words, “Sometimes ladies’ arms swell.”

The lymphatic system looks much like a root system directly under the skin that runs throughout the body. At certain junctions, pea-sized pockets, the lymph nodes, are working to pump and filter the body’s fluid waste. People generally have between 500 and 700 lymph nodes throughout the body with 15 to 30 under each arm. The waste they carry is mostly blood cells, but there can also be bacteria or even fat mixed in. Doctors typically remove the lymph nodes to check for the spread of cancer cells.

She teaches cancer survivors how to perform manual lymph drainage on their own bodies. It’s a technique that is like an extremely light massage.

“A manual lymphedema coach almost serves as a traffic cop,” she says. “So, if there is swelling, I am going to teach them how to reroute it down a pathway that is a healthier pathway. It’s almost like a highway system —  if it gets backed up — nothing can move.”

People might have a feeling of fullness or achiness before they see any swelling. If they intervene quickly enough, there is hope they can prevent significant swelling, she says.

“It’s good to know what isn’t normal, so you can catch any issues,” she says. “We are trying to give a lot of education around prevention and awareness, so if there is an issue people can act on it quickly.”

At the time of her cancer diagnosis, Collins was living in Long Island, New York working as a school district administrator, and the trauma of having both her breasts removed foremost on her mind. Those few words from the medical assistant about possible swelling didn’t seem significant.

“Did I process that? Of course I didn’t. I was getting ready to get cut open and maybe die,” she says.

Doctors today are more conscious of making patients aware of the risk of lymphedema, says Michelle Helms, a general surgeon at Cooley Dickinson who treats women with breast cancer.

Over the last 15 years there also has been a national movement to reduce the number of lymph nodes that are removed. Surgeons in the past might have stripped the armpits of them, leaving patients at high risk of developing lymphedema, but today surgeons are more careful to take only those that must go says Dr. Holly Michaelson, chief of surgery at Cooley Dickinson.

“Significant lymphedema is life altering and I think surgeons have done everything we can to make sure that fewer people get lymphedema,” she says.

With the accompanying pain and swelling, this can significantly diminish a patient’s quality of life.

“You are kind of dragging a big old water balloon in the arm,” she says. “This can be really tough.”

The stretched skin also becomes weak and can result in ulcers, which can easily lead to infections. By intervening quickly and being educated about the condition, women can lower their chances of developing severe infections, says McCutcheon.

Melissa Ross of Florence caught her lymphedema early. A little more than a year after her surgery to remove both of her breasts, she noticed some slight swelling. Her doctors at Cooley Dickinson had warned her about lymphedema, so she was looking for it.

“I knew what it was right away,” she says.

“I sort of jumped on it. I didn’t wait till it was really bad.”

Sometimes over a multi-week period she goes to see McCutcheon twice a week, but lately she’s found ways to manage her symptoms at home.

A dip in her backyard pool, she’s found, eases the swelling.

“Being submerged in water puts pressure on your lymphatic system, so it pushes the fluids out,” she says.

Other days, she jumps on a mini trampoline in her bedroom. The force of gravity can also works wonders, she says. ​​​​​​

Lymphedema never caused her significant pain; she still works part-time as a hairdresser, and rarely does she wear her compression sleeve.

Sometimes her skin around her right elbow gets taut, but she knows how to manage it and she credits her mild condition with catching it early.

Now retired, Collins wishes that someone had told her to seek treatment sooner. In the three years between her breast surgery and her lymphedema diagnosis, any small cut or scrap could leave her with a severe infection, and she had no idea why.

“It is important to keep the skin healthy because the skin is a barrier,” says McCutcheon. “If the lymphatic system is already slowed down — you can have an infection pretty seriously.”

This is what happen to Collins. One night she woke up in a pool of sweat to find that her left arm had tripled in size and turned a dark shade of red. She rushed to the emergency room in pain and with a fever. Doctors diagnosed an infection that stemmed from a bug bite, but didn’t mention lymphedema.

The swelling still hadn’t gone done six months later when she went to Cooley Dickinson for physical therapy for some herniated discs in her back. Her therapist, who was also certified lymphedema therapist, made the diagnosis.

Since then Collins has learned to manage her lymphedema. She bought the collection of compression sleeves and the therapist taught her how to gently massage her arm to ease the swelling.

“I don’t have to go to work because I’m retired, so I manage my lymph fluid in the morning,” she says. “Or I do it when I am putting lotion on my arm.”

To help others, Collins now volunteers at Cancer Connection, a Northampton resource center for people who have been affected by cancer. There she greets and befriends cancer survivors and those who have been newly diagnosed. When the newcomers are women, she makes sure to tell them about one particular risk: “I educate people about lymphedema because there are a lot of people who need the education,” she says. “… It’s a story that people need to know.”