Princess Anne, The Princess Royal, has visited Norfolk to launch a new network for Motor Neurone Disease care and to mark the 35th anniversary of a branch of charity, Save the Children. 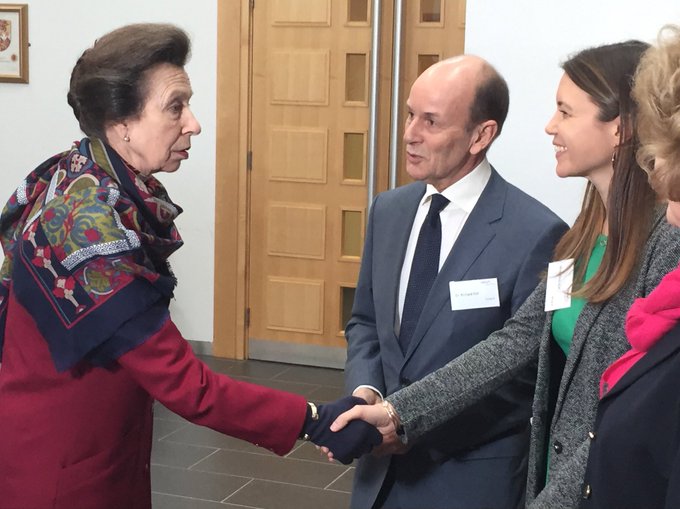 .@mndassoc royal patron HRH The Princess Royal meets our guest speaker Dr. Richard Kell, who is living with #mnd, and his daughter Emily at the official launch of @NorfolkMND today – our 21st Care Centre/Network

The network provides services including care, respiratory management and scientific research. Patients will now have to travel shorter distances by visiting staff who will be rotating between centres, taking their expertise direct to people living with MND as much as possible.

The Royal met professionals and volunteers from across Norfolk who work to support people with motor neurone disease as well as people living with MND, and their families and carers.

Unveiling a plaque and addressing the gathered guests, the Princess said: “I am delighted to join you and to highlight the MND Network. I think it’s a really important occasion. I know Norfolk well and the size it is has its issues. The ambition of the Network is to provide the services and to make sure care can be provided as and when it is needed.

Princess Anne has begun her speech at the Norfolk and Norwich hospital as she launches a new service to provide better support for patients with Motor Neurone Disease.

The Princess is now meeting doctors, nurses, patients and their families. She will be making a speech shortly to officially launch the service.

“I would like to thank those who have created the partnership, those living with MND and the health and social care professionals who notice where the needs are.”

The Norfolk MND Care and Research Network is funded by the hospital and the MNDA, and serves the Norfolk and the Waveney Valley and operates from the NNUH, James Paget University Hospital and the Queen Elizabeth Hospital as well as satellite clinics in Beccles and Cromer.

Chief executive of NNUH, Mark Davies said: “We would like to thank The Princess Royal for her words of encouragement and support for this MND Network.

Her Royal Highness has also unveiled a plaque to mark the launch.

“We look forward to continuing to work closely with the MNDA and the other partners in the network in helping improve care for people affected by MND across Norfolk.”

Princess Anne then went onto Hunstanton to mark the 35th anniversary of the Save The Children branch; arriving by helicopter at Old Hunstanton Golf Club, Anne was greeted by pupils of Glebe House School, and pupil Scarlett Hallard presented her with a posy of flowers.

The Princess Royal became patron of Save the Children in 2016 after serving as its president since 1970.

The Royal’s final engagement of the day was attending a dinner as Honorary Member of the Smeatonian Society of Civil Engineers at One Great George Street, London.