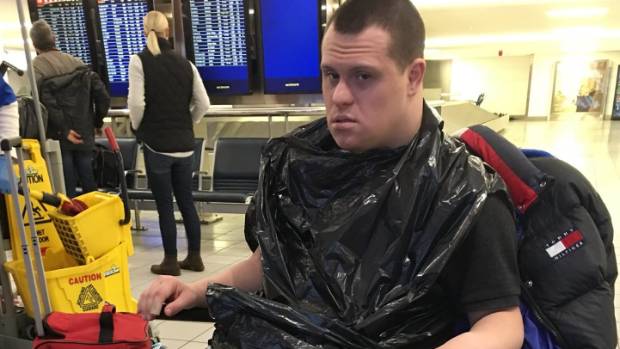 A US woman says her family was mistreated after being removed from an Alaska Airlines flight because her teenage brother with Down syndrome threw up.

Meaghan​ Hess said her parents were travelling with her teenage brother, Patrick Hess, when the incident occurred, NBC News reported.

Shortly after the trio boarded flight 779 in St Louis on April 5, flight attendants asked Patrick and his parents to deplane, said Hess, who was not travelling with them.

“After boarding the flight, Patrick threw up a little and the airline workers kicked my family off the flight.”

Alaska Airlines booked the trio on a flight the next morning, but did not offer to pay for accommodation, leaving them stranded at the airport for nearly 11 hours, she said.

“All they did was hand my parents a black garbage bag, saying that my brother could just throw up in that.”

Hess claims the airline’s conduct amounted to “disability discrimination,” and later said on Twitter that she was more bothered by how the airline treated the family after they left their original flight than by the fact that they were removed.

“It’s not just about getting kicked off but the terrible treatment after the fact. We are not looking for anything. We do hope this will encourage businesses to ensure they have policies and procedures protecting disabled persons,” she wrote.

The airline apologised, but spokeswoman Ann Johnson said the teen presented as a possible health threat.

“The family was not able to depart on their original flight because the family’s child was visibly ill,” she said. “Out of an abundance of caution the agent determined that the child was not fit to fly.

A spokesperson also issued an apology via Business Insider.

“We apologise that Patrick and his family had a difficult experience travelling with us.

“When a guest is actively ill prior to a flight, it is safer for them to be treated on the ground than in the air, where medical assistance is limited. In this case our guest’s symptoms did not improve and we were concerned for his wellbeing. We understand that this change put the family in a difficult situation and have reached out to them.”

The airline said it was looking into how the incident was handled and had reached out to the family to better understand what happened.

The airline’s contract of carriage says that it has the right to refuse transport to “passengers who are incapable of completing a flight safely, without requiring extraordinary medical assistance during the flight.”